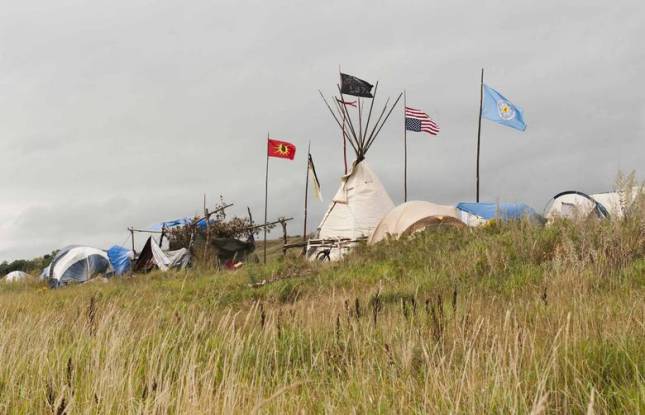 Many of my blog posts have touched on what can happen when governments and resource industries fail to collaborate with the people who are most impacted by resource extraction.  Violent conflict can occur when people’s needs are not heard, diminished or dismissed.  This is proving the case in the current protests happening in North Dakota (ND).

The Dakota Access Pipeline (DAPL) project will connect the Bakken and Three Forks oil fields in ND to refineries in Patoka, Illinois.  The proposed 30 inch diameter pipeline is expected to carry crude oil for almost 2,000 miles.  The projected transport capacity of this pipeline will average 500,000 barrels of crude a day![1]  The company responsible for this project claims that it is necessary, due to transport safety concerns by rail and trucking.  All in all, pipeline construction is expected to total more than 3.8 billion dollars, and run through four U.S. states.[2]

The primary conflict over this project comes from the Standing Rock Reservation, a Treaty space set aside for the Sioux tribe.  Protests over the construction of this pipeline, which runs less than a mile upstream from the Reservation, have been ongoing since April of this year.[3]  The Standing Rock Sioux object to the project, with very valid concerns over the impacts the pipeline will have on water resources and several sacred sites the pipeline runs through. 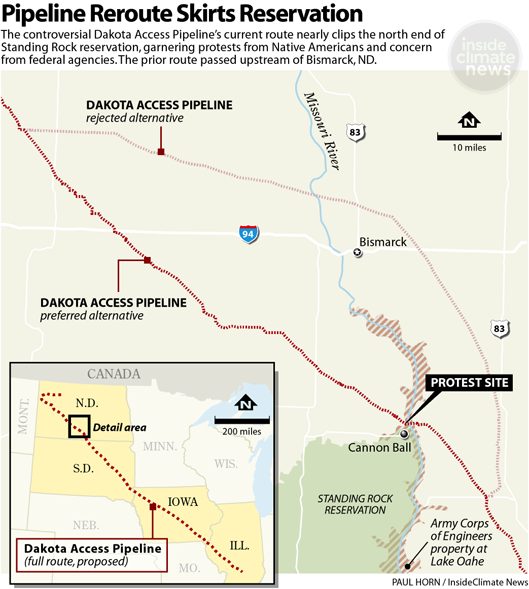 Although there are many objections with the pipeline as a whole, the real conflict lies with a portion of the project which runs just along the northern edge of the Reservation. This section runs approximately 38 km, and potentially affects the Cannonball and Cedar Rivers. 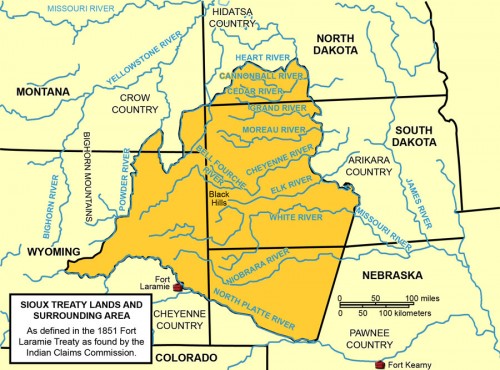 Energy Transfer Partners, a Dallas-based company involved in the project, insists they are protecting important cultural sites.  According to them, they “(have) taken and continue to take every reasonable precaution” to protect these areas.[4]  Tribal cultural experts have shown that there are many human remains in the area, and have worked to make sure the spaces are protected.

Because of these issues, the Standing Rock Sioux issued a law suit which challenges the project on the basis it violates Federal and Treaty laws (including the National Historic Preservation Act), and would disturb sacred sites.  Standing Rock then established a protest camp at the northern edge of the Reservation, in order to hold back construction while legal actions took place. In order to disperse protesters, State officials have tried several tactics, including removing sources of clean water from any areas surrounding the protest site.  Despite this, the camp has grown steadily since April, and includes several Native and First Nations communities, and well as concerned non-Indigenous protesters and well-known celebrities such as Shailene Woodley (Divergent). 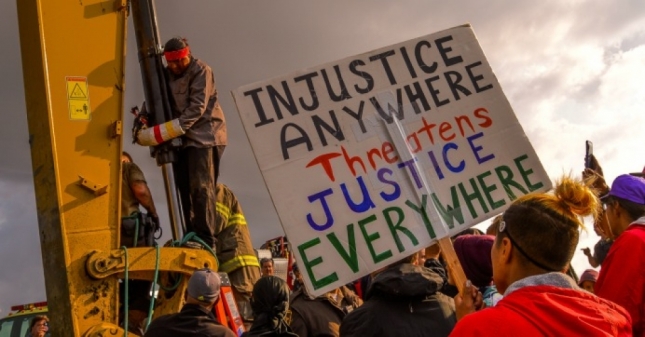 Things became violent on September 3, 2016.  In actions which defy logic, a private security company in charge of guarding the construction site used attack dogs and pepper spray against the occupants engaging in peaceful protest.  At least 30 people were pepper-sprayed by the guards, and six people were bitten and required medical attention. 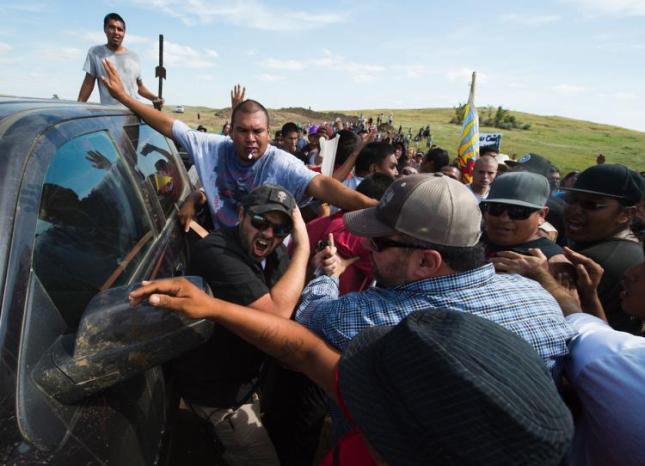 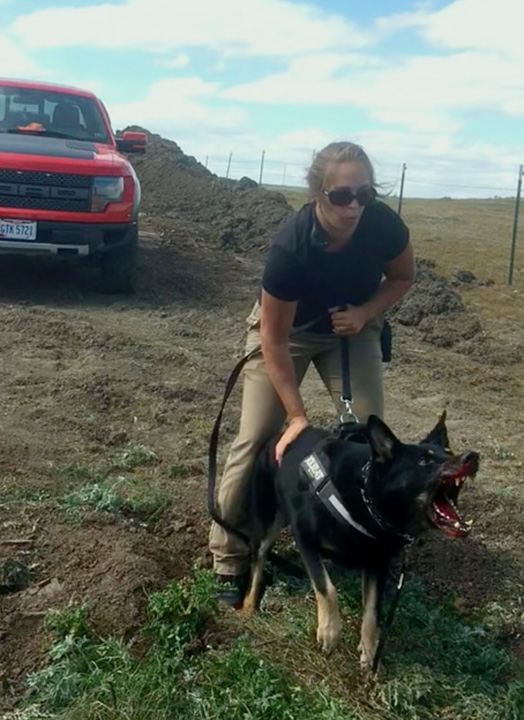 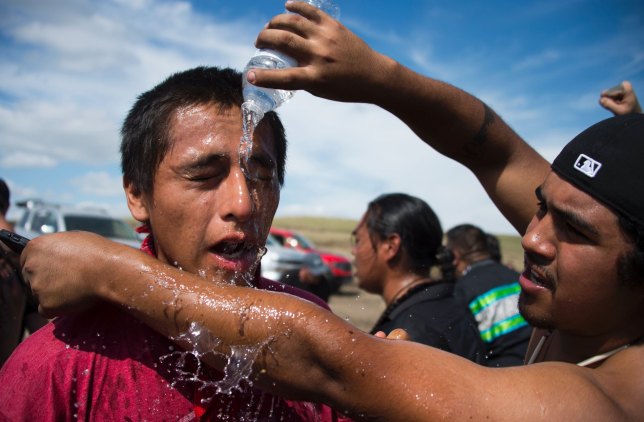 On September 9th, the ND State Court denied the Sioux request to halt pipeline construction, based on documented impact statements for environmental, water, and cultural sites.  Shortly afterwards, President Obama issued a declaration that the work was to be halted in the area surrounding Standing Rock Reservation.  In a statement put out by the Department of Justice, the Department of the Interior, and the U.S. Army, “Construction of the pipeline on Army Corps land bordering or under Lake Oahe will not go forward at this time.  We request that the pipeline company voluntarily pause all construction activity within 20 miles east or west of Lake Oahe”.[5]

Despite this, construction on the pipeline continues, and the North Dakota National Guard has been called to the location.  Over 20 people have been arrested during a recent armed confrontation.  Several prominent politicians have become involved, including Jill Stein (Green Party Presidential Candidate) and U.S. Senator Bernie Sanders. 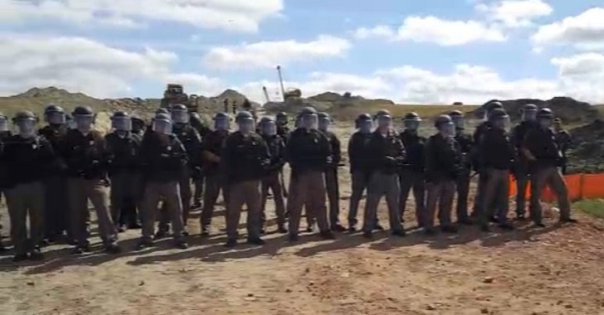 Stein took part in a protest action in solidarity with the Sioux on September 6.  After spray painting on a bulldozer, she has been charged with counts of misdemeanor, criminal trespass and criminal mischief.  According to her, it would have been “inappropriate for me not to have done my small part to support Standing Rock Sioux.”[6] 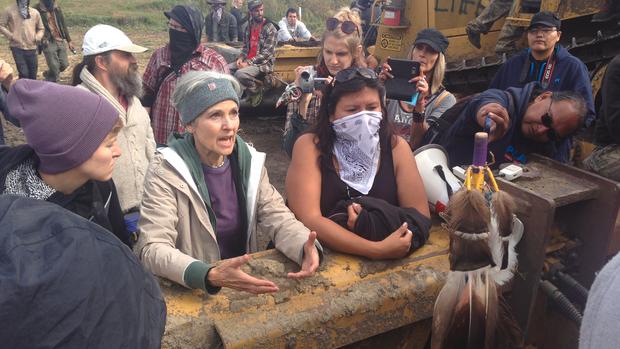 Bernie Sanders attended a rally at the White House on Tuesday, September 13.  During this rally, Sanders called for a “full environmental and cultural impact analysis of the pipeline. When that analysis takes place, this pipeline will not continue.”[7]  Sanders also questioned our reliance on fossil fuels, and called for more initiatives in alternative energy research.  Check him out here:

Protest actions have grown steadily since the National Guard was called out a week ago.  Solidarity Actions are taking place all over the world, including Europe, Japan and New Zealand.  Recent marches have occurred in New York City, Los Angeles, and even London, England.  In Canada, recent actions have taken place in Toronto, Vancouver, and several other municipalities.  Indigenous communities across the world are standing in solidarity with the Standing Rock Sioux. 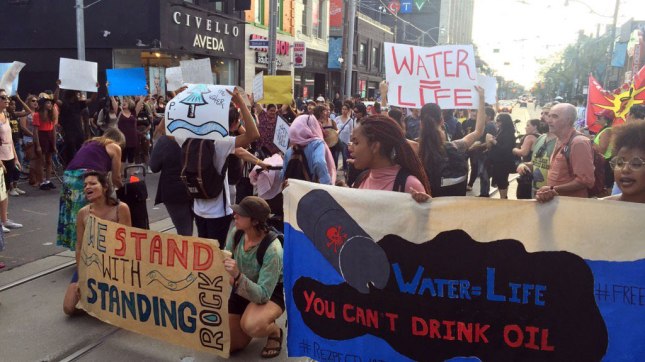 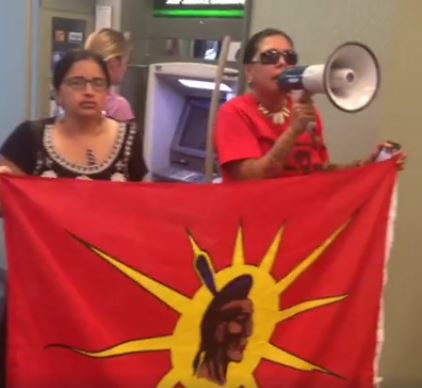 The outcome of this controversial project remains to be seen.  The ongoing conflicts will not stop, however, until Enbridge halts construction on the DAPL and enters in true consultations with the many opposing voices.  Perhaps, in the words of Bernie Sanders, it is also time to re-evaluate our reliance on fossil fuels, and “(transform) our energy systems away from oil, away from pipelines”.

Until next time, this is Spatial Integrity – making the Invisible, Visible! 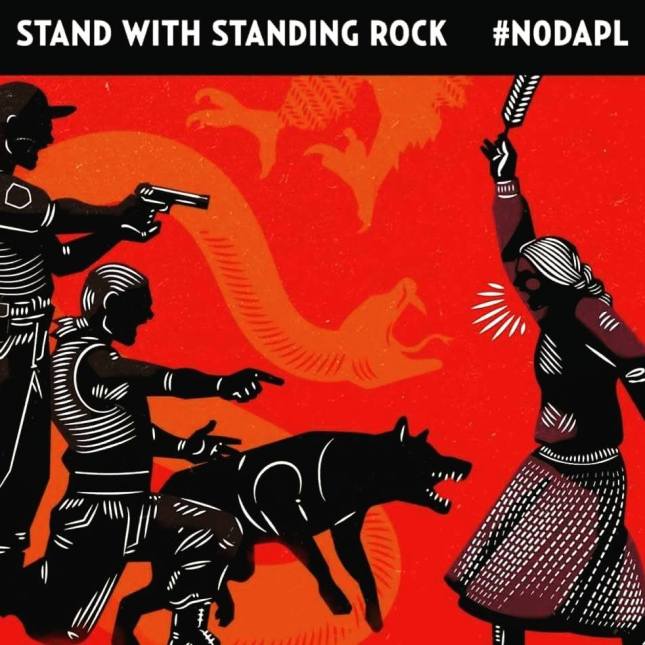